Viking was founded in New York State in 1961. Within a few years, the company was relocated in Lehighton, a small town in the Pocono Mountains of Eastern Pennsylvania. The business was operated for the next 35 years out of a building nestled in a valley between a winding stream and a country road. Viking started out with very basic dispensing systems and components, the majority of which were manufactured in-house. From eductors and probes, Viking eventually designed complete electronic dispensing systems fabricated in stainless steel cases. In the early 1980s, Viking acquired the injection molding equipment necessary to become the first chemical dispenser manufacturer to house their electronic controls in a plastic enclosure called the Supra case. Also in the 1980s, Viking designed and was awarded a patent for the SuperBowl, the first encapsulated powder dispenser to enable their customers to move away from the side mount reservoirs that were the industry standard. The SuperBowl quickly evolved into the Viking Bowl, the unit against which others are still compared to (and copied from) today.

In the early 1990s, Viking transferred their systems from the Supra case into the new Pro case design. Viking began looking for a facility that would provide the space necessary for more efficient manufacturing and increased sales without jeopardizing customer service or delivery time. In 1996, after looking at numerous existing facilities, Viking decided to build a modern 12,000 square foot building in Nesquehoning, PA, a move 12 miles West from the Lehighton location. The continued efforts by Viking to expand their customer base and sales efforts required the construction of a building addition in 2002. Viking continues to serve their customers, some of which have been with them for most of their 50+ years. Viking is the only dispenser manufacturer located in the growing northeast market. This enables us to provide unsurpassed service to our customers.

On December 31st 2007, Viking was acquired by Dema Engineering Company in St. Louis. Viking will remain at its current location in Nesquehoning, PA and operate under the name: Viking LLC, A DEMA Company. Viking brings 50+ years of experience, and, when coupled with DEMA’s 50+ years, results in an impressive 100 years of chemical dispensing and fluid control knowledge. 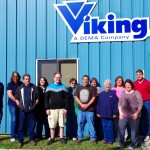 Our customers’ satisfaction with our products is the driving motivator in our effort to provide the best solution for their needs. 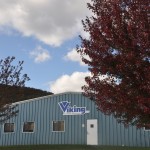 Viking is located in Nesquehoning, Pennsylvania. We have circuit board assembly, injection molding, machining capabilities, and assembly in our 20,000 square foot manufacturing plant.